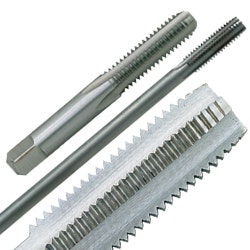 Hand taps are straight flute cutting tools which create or repair threads on the inside of a hole. Taper taps (roughing taps) are suitable for starting precision or difficult holes, because they have more chamfers over threads than a plug tap to distribute cutting force over more teeth. Plug taps (also called intermediate taps, second taps or finishing taps) have less taper, and can either completely thread a through hole or be used in conjunction with a bottoming tap in a blind hole. Bottoming taps almost no taper, and are used to finish tapping operations so that the thread extends as far as possible to the bottom of a blind hole. Harder materials like alloy steel can benefit from using a taper tap, which Available in standard & metric sizes, in left or right hand turning operation.